Warden of the Woodland Realm

The Woodland Realm, as it was sometimes called, was the kingdom of Thranduil of Mirkwood. The kingdom had been established in the Second Age by Oropher, a Sindarin lord of Doriath who had refused the invitation of the Valar to return to Tol Eressëa after the War of Wrath brough the First Age to a close. Instead he and his kin traveled east, and he was accepted as king by the Silvan Elves of Greenwood the Great. He and his household adopted the language and customs of his new subjects. Oropher’s seat was originally in halls built at Amon Lanc, the Naked Hill, but these were eventually abandoned and a northward migration was carried out in three stages as Greenwood the Great darkened and became known as Mirkwood. Eventually the realm’s new centre was established north of the Dwarf-road in underground halls reminiscent of those of Menegroth in Doriath of old. Oropher was later slain in the Battle of Dagorlad when, as part of the Last Alliance of Elves and Men, he led his forces in a charge against the enemy. Oropher’s son Thranduil succeeded him and it was during his reign that the Necromancer took up residence in the king’s old halls at Amon Lanc, which now became known as Dol Guldur, the Hill of Sorcery.

Mirkwood had become a dangerous place, and this elf is one of the wardens of Thranduil’s realm. He journeys far and wide, through the gloom of the forest, spying on the movements of the dark creatures that dwell therein and defeating them if necessary. Today he has come to the western edge of the wood, where it is much less dark than in the central sections, for here the sun is still able to filter down through the canopy. He has heard disquieting rumours of movement along the east banks of the Anduin, movement of the Enemy, and has come to investigate. He is clad in patterned leathers of grey, gold and green, with a voluminous hooded cloak to help camouflage him in the foliage. He is armed with spear and sword, but his elven grace and woodcraft mean that there are few eyes among the Enemy’s forces that can detect his presence… until it is too late. 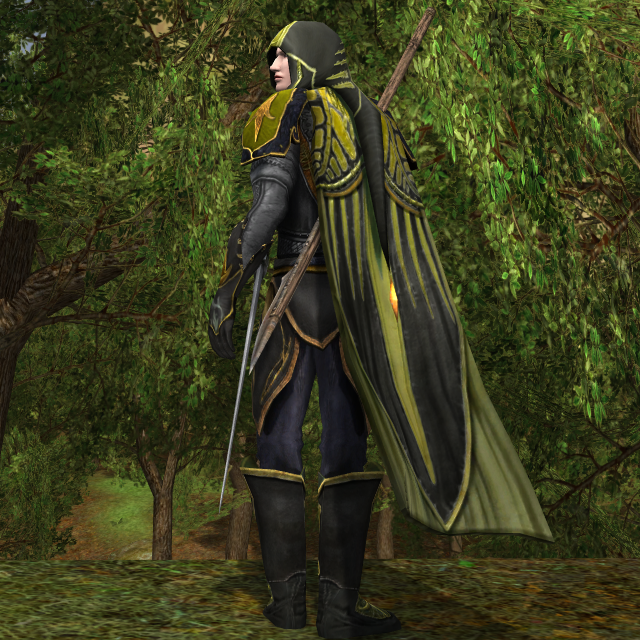 I’ve really got to level up some male characters so I can take screenshots in more appropriate settings. If only time was no object! This outfit was inspired by the boots. When dyed black I thought they looked like a good colour scheme for a camouflaged Mirkwood outfit, and after some playing around, this is the result. 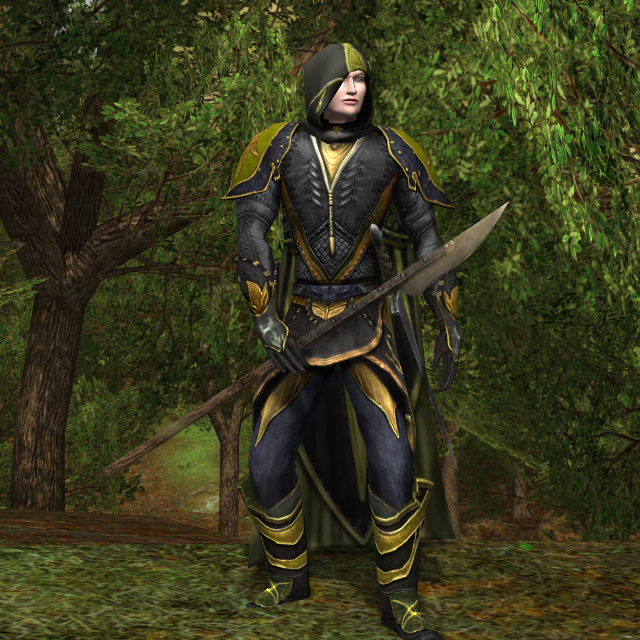 6 Responses to Warden of the Woodland Realm