Fellowship of the Ring: Gandalf the Grey 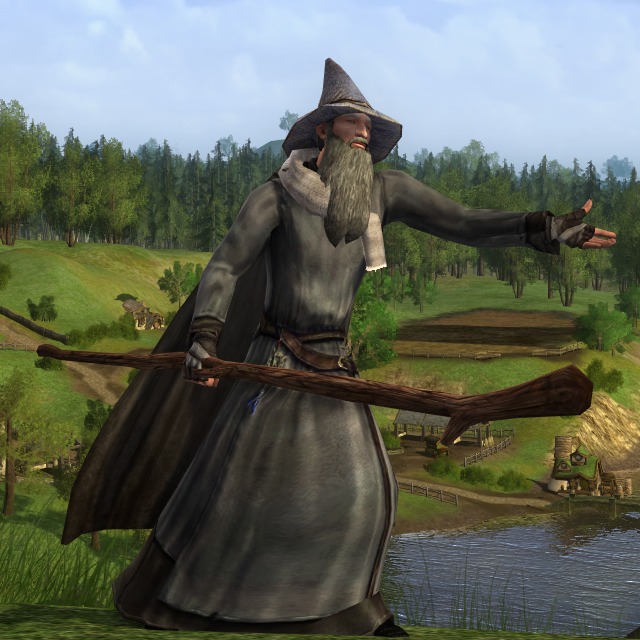 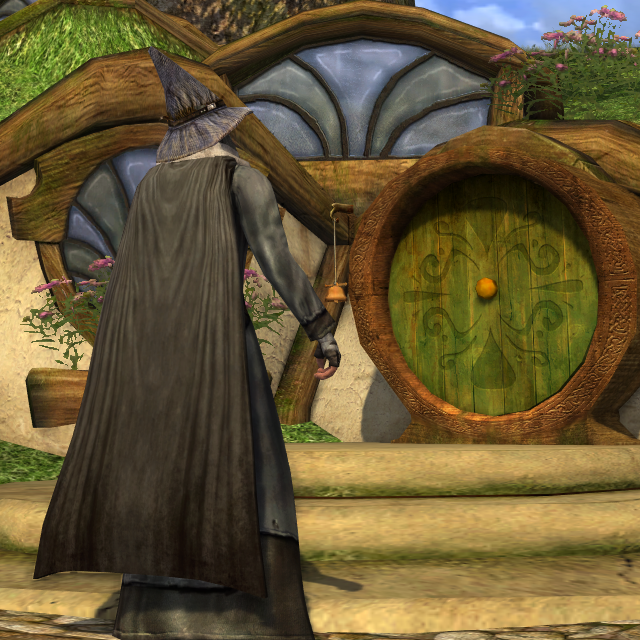 Gandalf! If you had heard only a quarter of what I have heard about him, and I have only heard a very little of all there is to hear, you would be prepared for any sort of remarkable tale. Tales and adventures sprouted up all over the place wherever he went, in the most extraordinary fashion.

—The Hobbit, “An Unexpected Party”

Gandalf the Grey was a mysterious wanderer who roamed Middle-earth and was friend to Free Peoples everywhere. He had many names in many lands: Gandalf (“wand-elf”) was his name among the Men of the North; he was known to Dwarves as Tharkûn (“staff-man”). Speakers of Sindarin — Elves and the high Men of Gondor — called him Mithrandir (“grey pilgrim”). Gandalf’s iconic attire consisted of “a tall pointed blue hat, a long grey cloak, … a silver scarf” and “immense black boots”. He wielded a “thorny staff” as well as Glamdring, an elf-blade of Gondolin. Gandalf had “long white hair”, a “sweeping silver beard”, “broad shoulders”, and “in his aged face under great snowy brows his eyes were set like coals that could suddenly burst into fire”. Indeed fire was central to Gandalf’s identity. As one of the five Wizards, he had been sent to Middle-earth to kindle hope in the hearts of the Free Peoples. He could ignite trees and pinecones to combat the enemy, as well as create blinding flashes of light. His fireworks were renowned among the Hobbits of the Shire. It seems likely that his inherent fiery nature was magnified by the power of Narya, the Ring of Fire, which he kept at the behest of Círdan the Shipwright. Of all the five Wizards, Gandalf was said to be the only one who did not fail at his appointed task, and he was the only one who showed any great interest in the race of Hobbits. His friendship with Hobbits would prove to be of vital import to the fate of Middle-earth and its Free Peoples. He is seen here arriving in the Shire for the celebration of Bilbo’s eleventy-first birthday, an occasion that will set in motion events sending Bilbo’s cousin and adopted heir, Frodo, on a long road into peril. But the peril does not belong to Frodo alone: Gandalf too shall face his greatest test in the dark days to come. 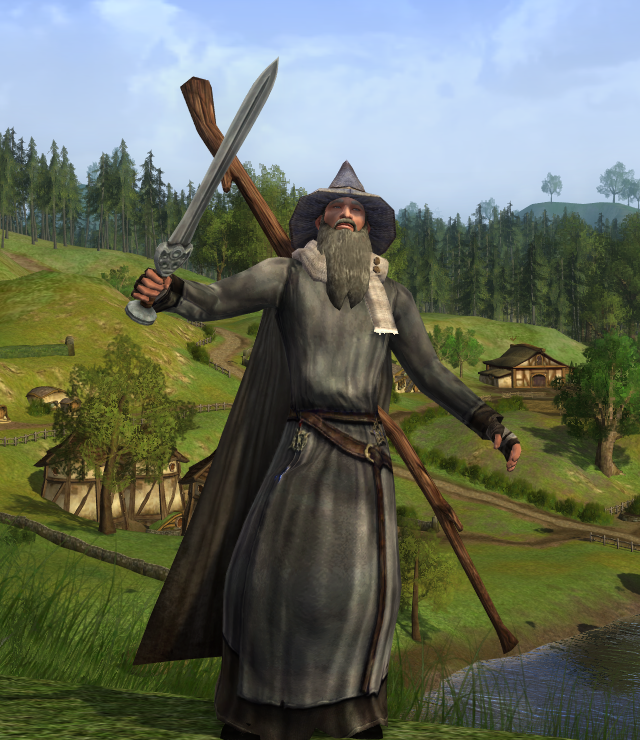 Today’s outfit is the fourth in a collection based on the Fellowship of the Ring. Gandalf is probably one of the most beloved (and well-described, physically) of Tolkien’s characters. Gandalf’s look and persona (described by Tolkien in one of his letters as “Odinic”) are so iconic that today’s outfit is surely nothing groundbreaking in terms of surprise combinations and has doubtless been worn by many players who want to evoke a little bit of Gandalf’s mystique, but I present it for the completeness of the Fellowship collection, and also for the benefit of any readers new to LOTRO who might appreciate a suggestion on one possible way to put together a Gandalf-inspired look. Tips:  For this outfit, I chose the Sun Hat from the summer festival because it has a pipe tucked in its band (unfortunately not visible in my pictures) and also because the hat retains quite a grey hue even when dyed navy blue, thus blending well with the outfit while staying true to the description of Gandalf’s hat being blue. However, if you don’t have access to the Sun Hat, there are quite a few pointed, brimmed, Gandalf-esque hats available in-game, some crafted, some world drop. Among the many nice options is one that shares a similar skin to the Sun Hat (complete with pipe, though it lacks the textured appearance and dyes more solidly) is a world drop hat often called the “Smoking Hat of…” It can frequently be found for sale at the auction house. Another more dramatically-brimmed option is the Quilted Hat (crafted — tailor T2). Tursur-lhopan have the same appearance as several other Dunland quest rewards.

Note: I have tagged this outfit “Man” even though Gandalf, of course, does not belong to the Race of Men.

26 Responses to Fellowship of the Ring: Gandalf the Grey