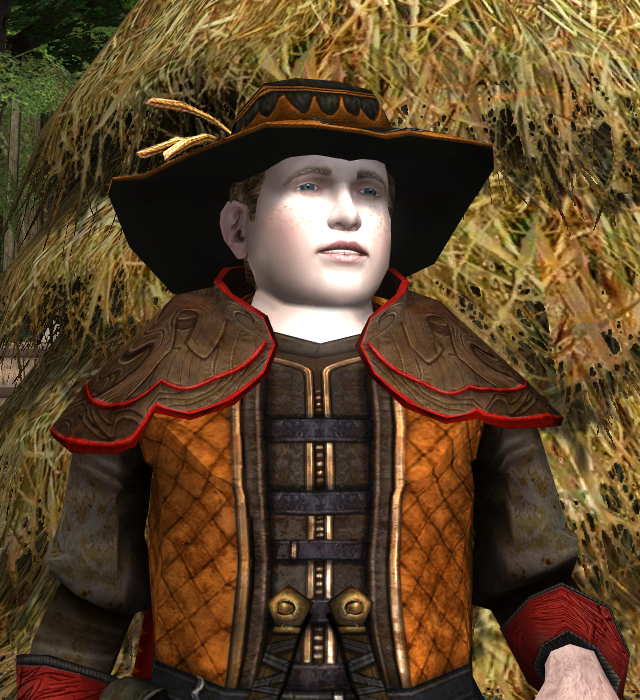 Buckland was a Hobbit-colony in the thin strip of land between the east bank of the Brandywine River and the Old Forest. It did not belong to any of the Four Farthings and thus was technically independent of the Shire. Because of the somewhat hostile nature of the Old Forest, the Bucklanders had built a great hedge, known as the High Hay, as a defensive wall on their eastern border. The High Hay ran in an arc from the Brandywine Bridge twenty miles south to Haysend, at the confluence of the Brandywine and the Withywindle. While the North Gate through the High Hay, located near the bridge, was stationed with gate-guards, it seems likely that the length of the hedge would have been monitored by haywards (indeed, Hayward was a Hobbit-surname of Bucklandish origin; and of course it is a surname in the Primary World as well). In the Primary World, a hayward (from Old English hege-weard, “hedge/fence-guardian”) was the traditional protector of the fences, walls, and hedges that protected a community’s hay meadows and croplands. Haywards ensured that the barriers were in good repair and that cattle and other livestock did not break into the enclosures to graze. Should this happen, a hayward would blow a horn, the symbol of his office, to alert the community. In Buckland, haywards likely served in this traditional role as well as in the expanded role of guarding the High Hay, and thus all of Buckland. The traditional winding of a hayward’s horn was likewise given an expanded role: that of the special Horn-call of Buckland, which warned against the intrusion of foemen, as happened on one fearful night in the early autumn of IIIA 3018. 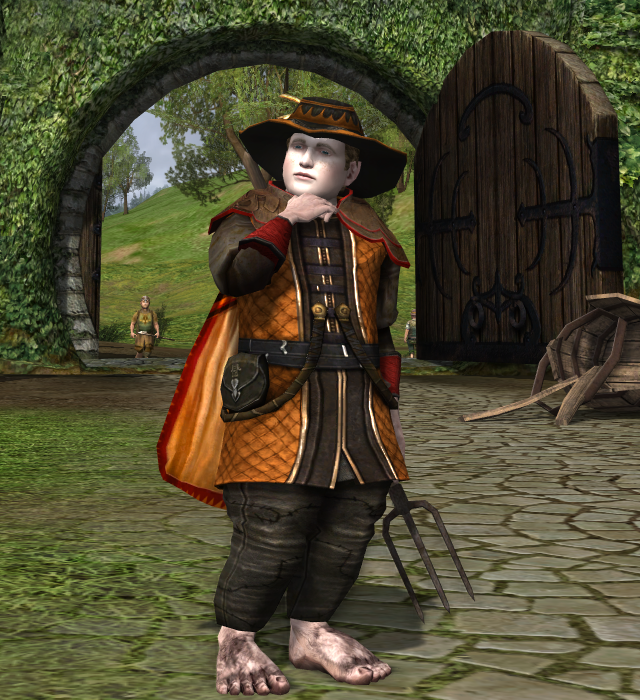 This lad is one of the haywards of Buckland, up in the early morning following the rather eventful wee-hours of the previous night, during which the Horn-call of Buckland was sounded against frightful black riders trespassing about Crickhollow. Although it is only early autumn, the mornings are bright and crisp, and he wears a quilted tunic and warm cloak. His wide-brimmed hat shows his station as a hayward, and he has decorated the hatband with several stalks of golden wheat. As he makes his usual rounds, he finds that the flight of the mysterious riders the previous night has breached several fences and that the livestock are roaming freely. The sheep are in the meadow, and the cows are in the corn! A blast on his hayward’s horn alerts the local farmers, and after a lot of pushing, pulling, and cajoling, the errant beasts are returned to their pastures. The threat (and luncheon) passed, our hayward settles in for a bit of a nap under a stook in the warm afternoon sun.

Now that September is coming to an end and I’m starting to accept that autumn is beginning, I thought it was time for a nice seasonal outfit. I’ve been pondering ways to use the awkward Ranger’s Cloak for a while now, and with its (undyeable) orange, red, and brownish-burgundy colour scheme, I thought it would be perfect for an autumn outfit. The Tengwar on the cloak, which for some reason are backwards, spell out sidhebdir, Sindarin for “peace-keeper” (our hayward must come from quite a literate family, perhaps even the Brandybucks!).

Changing gears, but on another linguistic note, you’ve probably noticed that I occasionally sneak lines from poems and nursery rhymes and sometimes songs into my posts and picture captions, and of course in this post there is a line from the nursery rhyme “Little Boy Blue” that references “corn”. Corn is often thought of as a specifically New World crop, that is, maize; but originally the term “corn” in English simply referred to any cereal grain, understood to be the primary crop of a given region — usually wheat or barley in England. This is what Treebeard refers to when he sings of “corn in the blade” in his song of the Entwives and what “the tall corn growing” refers to in the Rohirric poem “Where now the horse and the rider”. Sam’s taters, on the other hand, are an unsolved mystery! 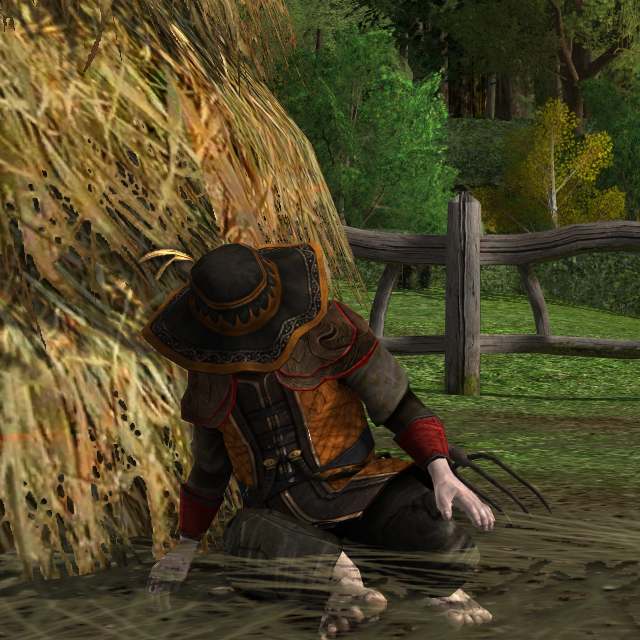 Tips: If you don’t have access to the Ranger’s Cloak, a perfect and easily-obtainable thematic alternative is the Cloak of Falling Leaves (purchased — LOTRO Store). The shoulders and chest piece in this outfit share their appearances with a variety of Dunland quest rewards.