I will go and face the minstrel,
Challenge him to sing in contest,
Challenge him as bard to battle,
Sing to him my sweet-toned measures,
Chant to him my oldest legends,
Chant to him my garnered wisdom,
That this best of boasted singers,
That this famous bard of Suomi,
Shall be worsted in the contest,
Shall become a hapless minstrel;
By my songs shall I transform him,
That his feet shall be as flint-stone,
And as oak his nether raiment;
And this famous, best of singers,
Thus bewitched, shall carry ever,
In his heart a stony burden 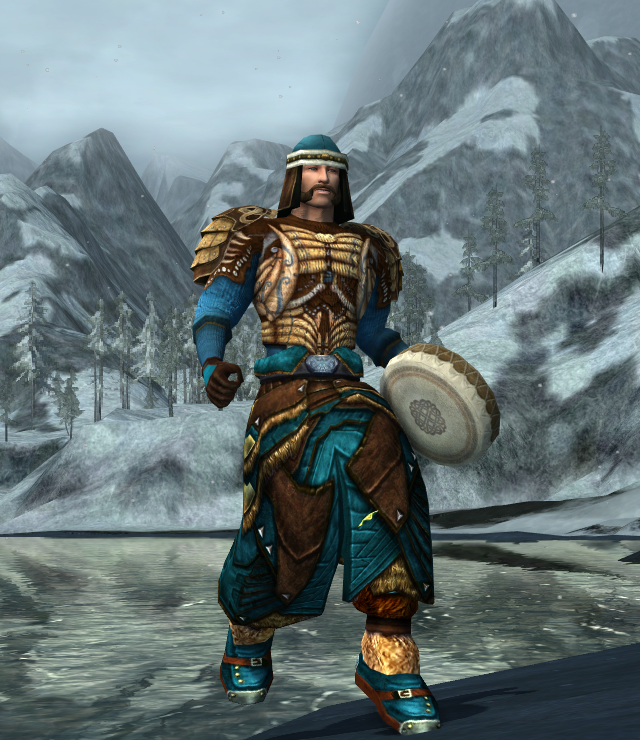 Several of the characters in Kalevala, the Finnish national mythological epic, are rune-singers, able to sing rhymes and poems and play music of potent magical power. Chief among these rune-singers was Väinämöinen, an ancient, “wise and worthy singer” of divine origin. One of Väinämöinen’s adventures involves a musical battle with another rune-singer, the impetuous youth Joukahainen. The two minstrels exchanged songs of power and wisdom but Väinämöinen proved to be far greater than his opponent. His songs caused mountains to be torn to pieces and oceans to heave, destroyed or transformed the clothing and weapons of his opponent, and drove Joukahainen into the ground up to his waist, imprisoning and ultimately defeating him. In a previous post, I wrote about how the Kalevala was a source of inspiration for Tolkien, and how Turbine has very smartly turned to the Finnish language and the traditional Sami culture in depicting the Lossoth of Forochel. Perhaps there were some among the Lossoth who followed the tradition of the rune-singers.

This Lossoth rune-singer knows many songs of wisdom and rhymes of lore that have true power: the power to inspire fellows, to raise the spirit, and to bolster courage, but the piercing splendour of his voice can also be used as a weapon to daunt the foes of the Lossoth. He accompanies himself simply, with a hand-held hide kannus, or rune-drum, which can induce trance-like states with repetitive percussion or rally his allies to great deeds with a lively war-rhythm. Today though, he has left the warmth of his hearth to answer the challenge of a rival rune-singer. He will hitch his fiery charger to his snow-sledge and ride out to meet this upstart in a contest of wits and a battle of songs. He is warmly clad in fur-lined clothing against the cold of the Icebay, and his jacket is decorated with carved sections of mammutti-tusk, showing his great status. His garb is richly-coloured and well-kept, for there may be maidens present to witness the song-contest, and a minstrel always dresses to impress! With Christmas and the holiday season approaching, I thought it was time for a wintry outfit. Naturally the land of Forochel and its people, and thus the Kalevala, come to mind when thinking of cold weather outfits. There are so many interesting comparisons that can be made between the Kalevala and Tolkien’s stories, far more than I can go into in a single outfit post, but surely one of the most striking is the notion that magic and power can be conveyed by song and music. We see this both in Tolkien’s stories and it is also reflected in our great game of LOTRO. In the stories, we are introduced to music as power from the very beginning, with the Ainulindalë, the Music of the Ainur which presaged the conception and creation of the universe. Many characters in Tolkien are able to use magical song and music to great effect, like Lúthien, Tom Bombadil, and the case could even be made for Sam Gamgee. One of the clearest examples I think is that of the battle of Finrod and Sauron, who strove against each other with songs of power: “Backwards and forwards swayed their song./Reeling and foundering, as ever more strong/The chanting swelled…” Very reminiscent of the contest of Väinämönen and Joukahainen! Beyond shedding light on some of Tolkien’s insipration I find the Kalevala quite enjoyable for its own sake, and unexpectedly humourous; there is a lot of slapstick wooing/kidnapping of potential brides (which reminded me of a particular funny quest in Forochel), and the afore-mentioned song-battle between Väinämöinen and Joukahainen is kicked off by the latter deliberately ramming the former’s snow-sledge with his own. During the course of the duel, the much older and wiser Väinämöinen goads Joukahainen to “Tell the story of creation,/Tell me of the world’s beginning,/Tell me of the creatures in it,/And philosophize a little.” That last line, which I imagine to be delivered with a smug smile and a raised eyebrow, always makes me laugh!

Tips: The East Rohan quest reward pieces that I used are available from a wide variety of quests in that region. All light armour pieces earned as quest rewards share the same skin (and the same goes for medium and heavy armour as well), as do the Hytbold armour sets. The leggings used in this outfit have the same appearance as those from the other two level 58 Mines of Moria instance cluster medium armour sets.