Túrin was a tragic hero of the First Age of Middle-earth. His deeds are recounted as one of the three Great Tales of the Silmarillion, and as Narn i Chîn Húrin, “The Tale of the Children of Húrin”. For Túrin was the son of Húrin, a great hero in his own right, and of the formidable lady Morwen. At the age of seven, Túrin was sent away by his mother to be fostered by the Elvenking Thingol of Doriath, and while Túrin was gone Morwen gave birth to Túrin’s sister Nienor. Not long after, Húrin was lost in Nirnaeth Arnoediad, the Battle of Unnumbered Tears, against the forces of Morgoth the Enemy. Unbeknownst to all, Húrin had been captured by Morgoth, who cursed him and his family. This curse played out slowly over the course of Túrin’s life, yet how much of the sorrows of Túrin were due to Morgoth’s curse or to Túrin’s own pride and arrogance cannot be judged.  Indeed many were the sorrows caused by Túrin himself to his own friends and loved ones. He accidentally slew his friend Beleg, the captain of Thingol’s Marchwardens; his inactivity led to the death of the Elf-maid Finduilas, who loved him; and when he took bloody revenge upon Brodda, the Easterling who had claimed his father’s lands, Túrin inadvertently sealed the fate of his own kinswoman, Aerin, that Brodda had to wife. But the worst of all his deeds was unknowingly taking to wife his own sister, Nienor, who had been born after Túrin’s fostering in Doriath. The siblings had never known each other and Nienor’s memory had been lost after her encounter with the dragon Glaurung. Though Túrin slew the dragon, the truth was revealed and Nienor, heavy with child, flung herself into the gorge of the river Teiglin. Túrin in sorrow and horror cast himself upon the black blade of Anglachel, the sword of Beleg, and thus his tragic life was brought to an end. But by these tragedies was it shown that Morgoth’s curse was not invincible; for it was defeated by death. Túrin and all his family died, and thus by the grace of the Gift of Men passed beyond the circles of Middle-earth, and beyond the reach of Morgoth’s power for ever.

Unlike most of the golden House of Hador, Túrin was dark-haired. He was tall, grim in appearance and spoke little, remembering every injustice done to him whether real or imagined. He had a swift and terrible temper, but was quick to pity and could be moved to tears by the hurts and sorrows of others. Here Túrin is seen in his younger days on the marches of Doriath. The Orcs of Morgoth have come to fear Túrin above any other, for his prowess as warrior is great, and he wears upon his head the dread Dragon-helm of Dor-lómin, an heirloom of his house, topped in mockery with a curving likeness of the dragon Glaurung. Later in life he will come to wield Anglachel, the strange black sword forged by Eöl the Dark Elf, and with it he will do deeds both great and terrible. In an effort to conceal his identify and abjure the curse of Morgoth, Túrin will bestow upon himself many names during his lifetime. The most significant and ill-advised of these will be Turambar, Master of Doom. 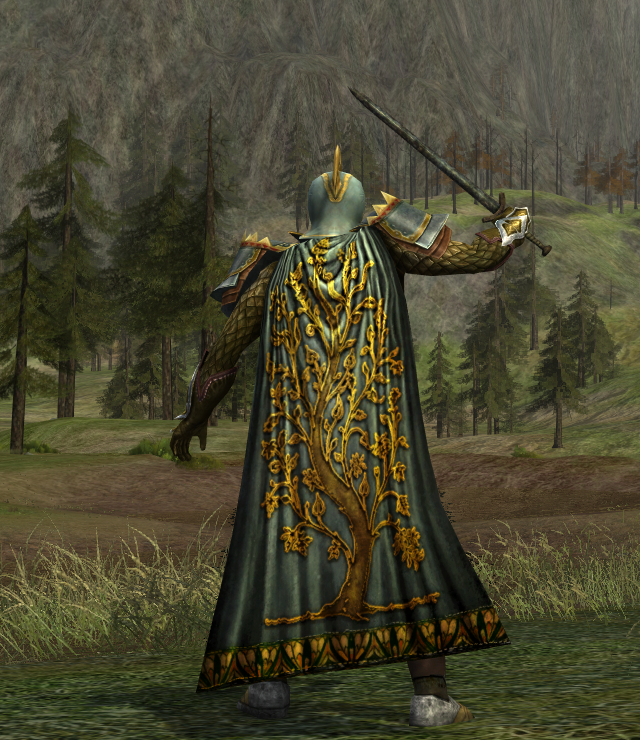 There is so much more to say about Túrin than I can possibly fit into a post of reasonable length, from the theme of fate versus free will, to Túrin’s folly in constantly concealing his identity and renaming himself, to the literary allusions to Oedipus of Greek mythology, Sigurd of Norse mythology, and Kullervo of Finnish mythology. The circumstances of the double-suicide of Túrin and Nienor even shows echoes of the deaths of Romeo and Juliet: when Turin lay poisoned by the dragon Glaurung, apparently dead, Nienor reversed the name Túrin had given himself, crying: “Farewell O twice beloved! Túrin Turambar turun ambartanen: Master of Doom, by Doom mastered! O happy to be dead!” before taking her fatal leap. Túrin is certainly one of Tolkien’s most complex and tragic figures, and his tale is one of my favourites.

In terms of the outfit, I wanted to make a warrior’s outfit worthy of one of the heroes of the First Age, and I’ve been really wanting to use this unusual crested helmet for a long time. The shape of the helmet strongly reminds me of the Dragon-helm of Dor-lómin as depicted in Alan Lee’s illustrations for The Children of Húrin, and so even though the crest isn’t carved like a dragon I had to use it. The challenge was to find pieces coloured similarly to the helmet’s unusual (and unreproducible by dye) base colour. The device of the dragon, recalling Glaurung, on the breastplate of the chest piece from the Guardian’s Draigoch set was a lucky coincidence, and I was inspired to use the leggings by Jackson of Plate Metal Jacket, who opened my eyes to their cosmetic value in one of his recent posts. The low-level vendor-purchased sword, with its dark, pitted iron appearance, made a great stand-in for Anglachel.

Tips: The helm in this outfit shares its appearance with Dornhador’s Helm (quest reward — Eregion [5o] The Wolves’ Master). It can be found as a world drop in level 50+ regions and, finally, it can also be purchased from the Turbine Store, as Ceremonial Razor-helm. The chest pieces from the Champion and Captain sets available from the adventurer’s quartermaster in Galtrev share the appearance of the one used in this outfit. The leggings I used in the outfit share their appearance with all of the medium armour leggings received as quest rewards in East Rohan, as well as the Hytbold medium armour sets.