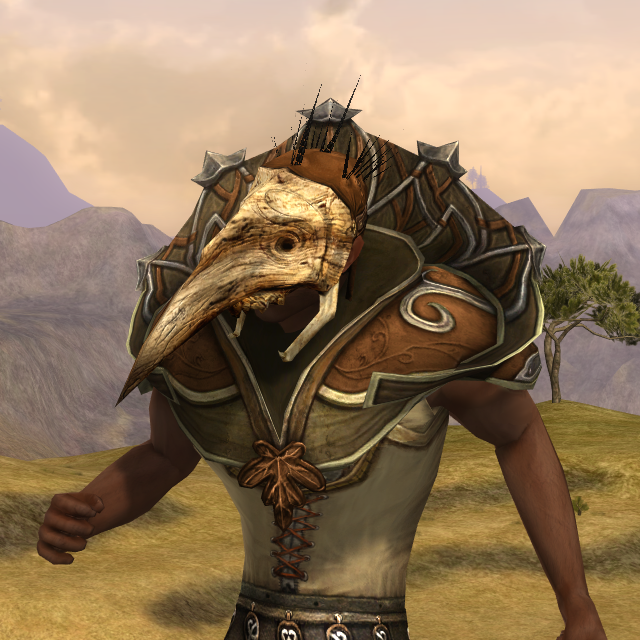 Grey as a mouse,
Big as a house,
Nose like a snake,
I make the earth shake,
As I tramp through the grass;
Trees crack as I pass.
With horns in my mouth
I walk in the South,
Flapping big ears.
Beyond count of years
I stump round and round,
Never lie on the ground,
Not even to die.
Oliphaunt am I,
Biggest of all,
Huge, old, and tall.
If ever you’d met me
You wouldn’t forget me.
If you never do,
You won’t think I’m true;
But old Oliphaunt am I,
And I never lie.

The distant lands of the Harad — the South — were little known to the Free Peoples of northwestern Middle-earth, but they seem to have loomed large in their imagination. Eärendil the Mariner was said to have sailed off-course during his voyages to a land of “nether heats and burning waste”, presumably Far Harad; but away from these “he turned in haste”. It is also known that Gandalf visited the South, where Men called him Incánus, a name which may have meant “North-spy”. Aragorn too had travelled into the Haradwaith, during his youthful errantries, and it seems that he ranged far afield indeed, for he came to lands so distant that “the stars were strange” — that is, lands south of the Girdle of Arda (the equator). Even the Hobbits of the Shire had stories and folk-verses, such as the one above, recited by Samwise in Ithilien, about the ferocious oliphaunts of the Sunlands. In addition to the hot, dry deserts described in the Eärendil verse, we learn (in the chapter “Helm’s Deep”) that there were also dark jungles inhabited by apes in the South. As for the people of Harad, known to Men in the North as Southrons or Swertings and to the Elves as the Haradrim (“the South-host”), they were, of course, not of one monolothic culture. Doubtless they comprised many different tribes and nations, with those of Near Harad being more familiar to the Men of Gondor than those of mysterious Far Harad. Over the long ages, the Men of the South had succumbed to the deceits of Sauron and fallen under his Shadow, becoming his servants and hating the Men of the North. Certainly their enmity may have been easy to encourage, for the history of contact between the Southrons and the Men of Númenor was often violent and oppressive. At the end of the Third Age, during the War of the Ring, Southron warriors from both Near Harad and Far Harad marched from their own lands into the North, where they fought in the hosts of Mordor as they attacked Osgiliath and Minas Tirith. They goaded to war mûmakil, the oliphaunts of Sam’s poem, enormous tusked and trunked beasts brought up from the southern lands with castles upon their backs: a terrifying sight for the Men of Gondor, creatures of legend made real.

This man is a mûmak-warrior from Far Harad. He and the warriors of his village have begun a long journey under the burning sun, across sere grasslands and burning wastes to the cold and distant North, whither they have been summoned to the service of Sauron. The warrior’s people venerate the mighty mûmakil and wear ritual oliphaunt-masks to call upon the great beasts’ might and ferocity in battle. His mask is carved of wood and decorated with coarse bristles and carven ivory taken from one of the oliphaunts. His great stiff, sail-like collar evokes the vast flapping ears of a mûmak and not only makes him appear larger and more intimidating upon the field of battle, but also shades his head on his northward march. He wields a great club fashioned from a branch taken from one of the gnarled trees that stand sparsely scattered about the sun-baked savannah of his homeland. A tall and powerfully built man, a blow from his club is like to the ruinous stamp of a mûmak’s great flat feet or the lash of its snaking trunk. He will bring fear and death to the hated Men of the North. For a while now I’ve been pondering how I might depict a warrior from Far Harad using the cosmetic options currently available in-game. Beyond the description of Sauron’s warriors from Far Harad being “black men like half-trolls with white eyes and red tongues”, there is little to nothing in the published text to go on in terms of the cultures of the Haradrim. There is a clue in the drafts of the text, however, where the South was given the name “Sunharrowland”. This is derived from the Old English word Sigelhearwan, used to refer to Ethiopians, the people of the Kingdom of Aksum. In his two-part essay “Sigelwara Land”, Tolkien theorised that the Anglo-Saxons were likening or even equating the Ethiopians to the “sons of Muspell” — fire giants “with red-hot eyes that emitted sparks and faces black as soot”. This description bears a certain resemblance to that of Sauron’s warriors from Harad. Therefore, like I’ve done in the past with outfits meant to depict various Easterlings, I’ve turned to some real-world cultural inspiration. This time, given the clues scattered throughout the published text and the drafts about what Far Harad might be like, I was inspired by the mask-wearing traditions held by many cultures in sub-Saharan Africa (which includes Ethiopia). With that inspiration in mind, the interesting wooden mask from our in-game treasure-hunt event gave me the foundation of this outfit. Even though the mask is supposed to resemble the head of a cave-claw (which, by the way, is to me one of the most inexplicable monsters in the game in terms of lore — any theories?), its shape could be seen as vaguely elephantine, with the trunk hanging down and the two small mandibles being reasonable stand-ins for decorative tusks. I tried to suggest the ears of an oliphaunt by using the sail-like shoulder piece, and the other pieces were chosen for their washed out, sun-bleached colours and to try to create an exotic sillhouette.

Tips: A cosmetic version of the Arrow of the West Leggings are, at the time that I’m writing this post, available for purchase from the LOTRO Store as part of the Arrow of the West full cosmetic set. You can click on the clothing mannequins in-game to access their entry in the Store. If you don’t have the same chest piece that I used (or one of its variously-named versions), there are several other low-level chest pieces that come in a sleeveless style that can be found as world drops and have the right colour to match the leggings when dye-washed. Searching for “vest” in the light armour listings at the auction house will usually turn up a number of good options.

18 Responses to Mûmak-warrior of Far Harad