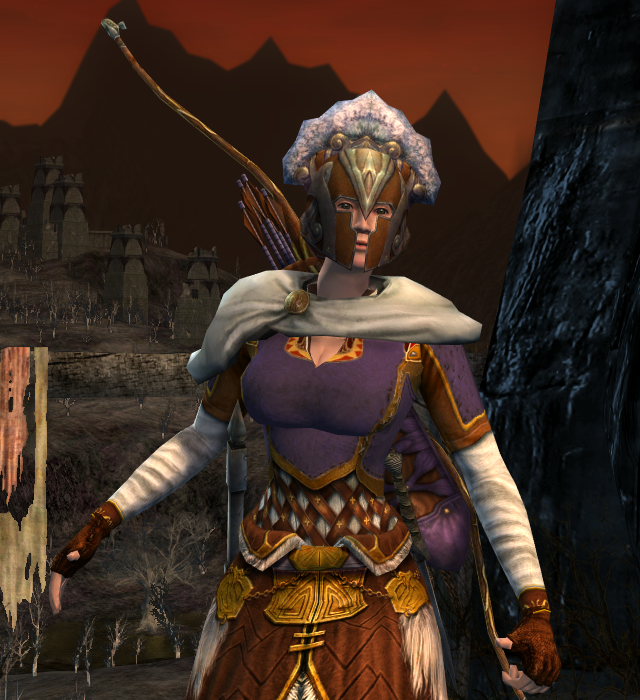 The Hill-men were the descendants of the indigenous Men who inhabited Middle-earth before the return of the Númenóreans. The Dunlendings were one branch of Hill-men; the ancestors of the Men of Bree, another. In the Third Age, the Hill-men of northern Eriador became subjects of the kingdom of Arnor, but after Arnor fell, the Hill-men of Rhudaur turned to evil and allied with the realm of Angmar. In LOTRO, Turbine has presented some of the descendants of Rhudaurian Hill-men as having remained in the service of Angmar (such as the Corcur and the Trév Duvárdain), while others (such as the Trév Gallorg, and presumably additional clans, though we do not meet them) have returned to an independent, nomadic lifestyle in the very shadow of the land of Angmar. According to the LOTRO Lorebook, these clans established a neutral settlement, “a great tent city they named Aughaire, the Meeting-place. Here, the clans trade in furs, meats and produce, medicines, and slaves.” This woman is a cateran, a warrior belonging to one of the warbands of the hill-clans of Angmar. Though some see her and her fellows as little more than marauders and cattle-thieves, she is a skilled archer and as often wields her bow against the Angmarim, the servants of the Iron Crown who would enslave her people, as she does against warriors from rival clans. Indeed, she and the others of her fian, or warband, are among the few who dare to decry the wickedness of the servants of the Iron Crown and to actively fight against them. They rely upon being more lightly armed and armoured than their Angmarim adversaries, enabling them to move swiftly across the hilly wastes of Angmar to strike where it is least expected. Though no snow falls in the winters of Angmar, only grey ash, it is still cold, and our cateran is warmed by a fur-lined kilt and boots. A thick mantle drapes her shoulders, and her head is protected by a helm bearing the distinctive transverse crest favoured by the Hill-men. Thus arrayed for battle, she and her warband assail their foes with their battle-cry upon their lips: “Beart de réir ár mbriathar! Deeds to match our speech!”

This outfit is a retroactive “his and hers”! I’ve gone back to one of my favourite outfits, “Hill-kern of Angmar“, for inspiration and tried to make a somewhat more lightly armoured, feminine version. I’ve used the same leggings and boots as the foundation for the outfit, and a variation on the helmet, keeping the distinctive transverse crest, which you can see on many Hill-man NPCs in-game. I’ve also adjusted the colour scheme slightly. Again, in keeping with Turbine’s use of Gaelic language elements and themes to depict the culture of the Hill-men, I’ve gone to Irish and Scottish mythology and folklore for the context of the warbands, or fianna, and the caterans, or ceathairne.

Tips: If you don’t have access to Faerchar, there is another helmet, which I used in the “his” version of this outfit, which has a similar transverse crest silhouette but can be found as a world drop. If you prefer a hooded look, the outfit looks nice with the Worn Ranger’s Hood (quest reward — epic [75] Volume 3, Book 5, Chapter 1: Separate Ways – Corunir), dyed white. If you don’t have access to the shoulders that I used, or if you want to more strongly echo the Hill-kern design without using the same pieces, an excellent alternative is the Lesser Memory of the West Shoulder Guards (bartered — Harndirion novices quartermaster/tier 1 difficulty Lore-master armour). The leggings in this outfit share their appearance with the Leggings of the Mighty Verse (bartered — Twenty-first Hall Minstrel trainer). I really like how well the bow that I used matches the chest piece in this outfit, with its brown, red, and gold colours; the version that I used is equip level 20 and drops from Barrow-ironbound lootboxes, but I believe that lootboxes from all level bands drop versions of this bow.

9 Responses to Hill-cateran of Angmar