During the Watchful Peace of the early Third Age, the forefathers of the Men of Dunland dwelt in the wide green land of Calenardhon, the northernmost fief of the realm of Gondor. In those days, Gondor was overseen by the Ruling Stewards, who recalled the hosts of Gondor from the fortresses of Calenardhon, abandoning the land to the Dunlendings’ ancestors in all but name. This was the situation until IIIA 1944, when Easterlings crossed the Anduin on the western marches of Calenardhon and Gondor repelled the invaders only by calling upon the aid of the Éothéod, the Horse-folk of the North. Then, in friendship, the Steward of Gondor granted the land of Calenardhon to the Éothéod; but to the men who dwelt there already, the Horse-folk were usurpers who drove them out of their own lands. They withdrew to the hinterlands of Calenardhon and over the River Isen into the hill-lands beyond. By the end of the Third Age, their descendants dwelt there still, known as the Dunlendings, Hill-men, and they remained hostile to the Forgoil, the Strawheads, who had displaced them. 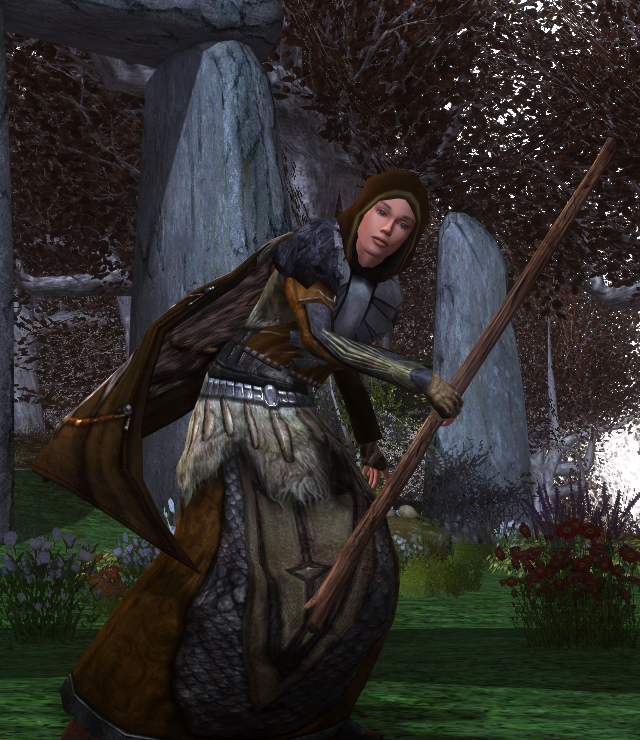 Because the Dunlendings have long been estranged to the other Men of northwestern Middle-earth, they have many practices that would seem dark and mysterious to a Man of Rohan or Gondor. This Dunlending woman, for example, holds a special place in Dunlending society. There are some, even among her own people, who would call her gurach: hag, witch; but she is a seer, a druidess. Formally instructed in secrecy over many years by learned mentors, she is wise in the ways of ritual, sacrifice, augury, and the laws of her people. She is also an envoy and guide to Annun, the Otherworld of the spirits. She dwells apart from her people for much of the year, tending a grove of sacred oaks and a ring of standing stones, for it is here that she performs the ritual of oak and mistletoe, ensuring the fertility of the land and its people, and here that the waking world of mortal Men comes closest to the fey Otherworld. 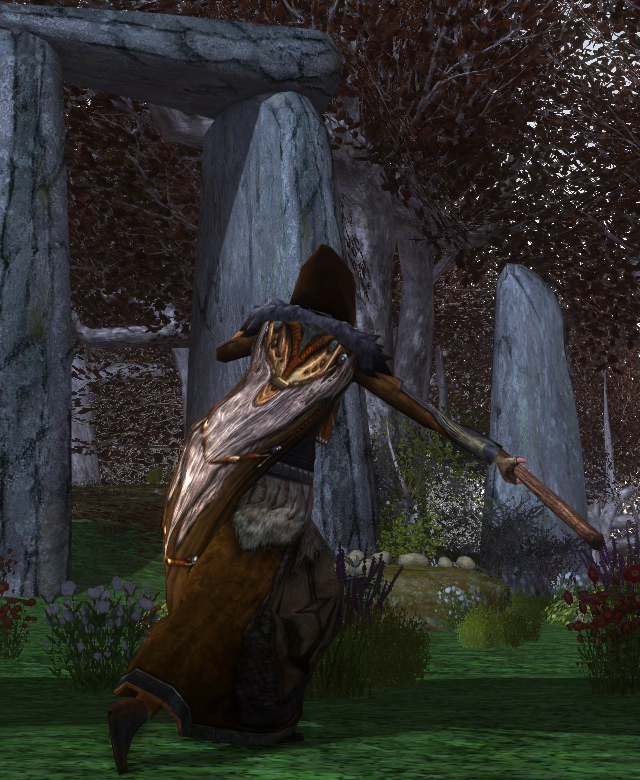 In LOTRO, Turbine has loosely modeled the various societies of the Hill-men (including the Dunlendings) upon Iron Age Celtic peoples. The Dunlendings have been given a Welsh flavour, with Welsh words being used to represent their language. This was a good choice for a number of reasons. For one, the Dunlendings lived alongside the migrating Stoor-hobbits for a time, and a certain amount of linguistic crossover took place between their two peoples; this influence is reflected in the names of some of the Hobbits of the Shire having Stoorish ancestry. For example, the first Master of Buckland was called Ogmandab Zaragamba, and in The Lord of the Rings, Tolkien “translates” this as Gorhendad Oldbuck; the first name means “great-grandfather” in modern Welsh. Furthermore, there are certain parallels that can be drawn between the fictional history of the Dunlendings and that of the Celtic Britons of the Primary World, in that both lived in a land more or less abandoned by a much more advanced, powerful nation (Gondor and Rome), but were then pushed to the periphery of that land by incomers (the Rohirrim and the Anglo-Saxons).

Tolkien never mentions druids in any of his writings, but for an adaptation in which Dunlending society is to be seen more intimately than it is in the book, it seems plausible that they might have had a spiritual tradition similar to the druidism of the Celts. Druidesses are known in Celtic mythology (particularly in the Irish tales of Fionn mac Cumhaill, who was raided by a druidess named Bodhmall); indeed the vilification of the old pagan practices may have led to druidesses being remembered in folklore as witches (gwrachod in Welsh, singular gwrach; translated “gurach” in LOTRO). Little is known about the Primary-world historicity of druids (derwyddon in Welsh, singular derwydd; translated in LOTRO as “derudh”, as in the well-known Derudh’s Stone pocket item), but their practices may have been closely tied to beliefs about the Otherworld of the spirits. The Otherworld was a sort of  Faërie-land, which in Welsh mythology was called Annwn and was often represented as an island to the west. Interestingly, in Tolkien, Faërie is Valinor, itself an island located in none other than Annûn; but here the word is Sindarin and means “the West”. I do not think the similarity of the words is accidental, and I think the folks at Turbine drew the same conclusion. When you are traveling in Dunland and encounter a cun Annun, a hound of Annun (Cŵn Annwn in Welsh), does the name refer to Welsh Annwn or Sindarin Annûn? I think both. To the Dunlendings, who fear the Elves and the even greater Powers that dwell in the West, Annun would be a fearful place, and thus the evil black dogs that stalk their lands would be ripe for association with it. 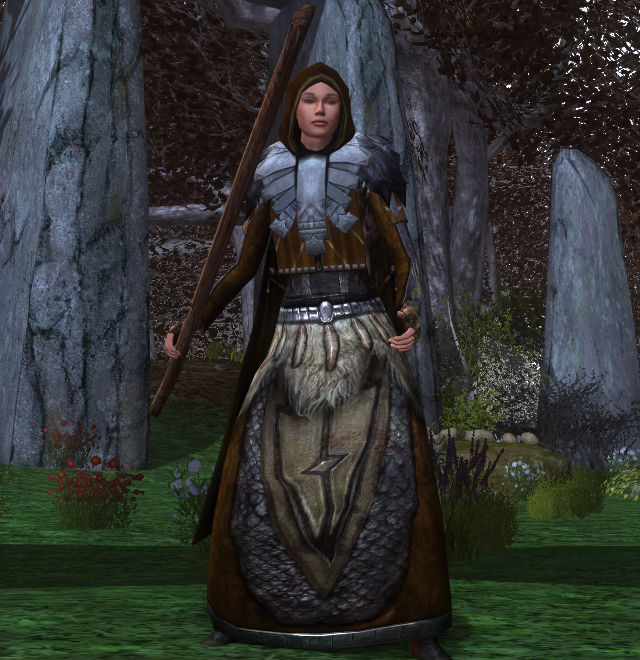 Tips: The shoulders from the Rune-keeper and Lore-master Moria instance cluster sets have the same appearance as the shoulders used in this outfit. If you’d like to recreate this outfit with a hat instead of a hood, I experimented with fairly good results using the Ceremonial Silver-voice Helm (bartered — skirmish camp cosmetics quartermaster/Helegrod cosmetic clothing – light), dyed rust, to approximate the almost mitre-like hats depicted in some imaginative 19-century illustrations of druids. The hat has some undyeable highlights in an unusual red colour; to match them try using the Ceremonial Ajokoira Gloves (crafted — T5/Lossoth reputation) dyed orange.