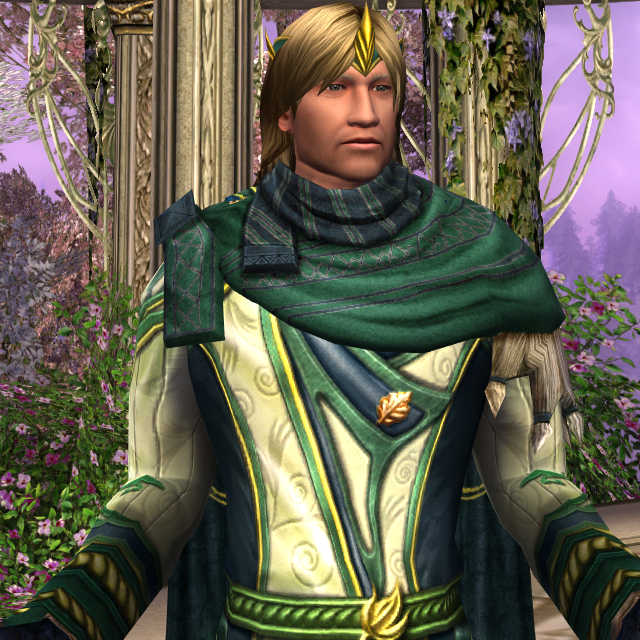 [With Gandalf] went the Prince of Dol Amroth in his shining mail. For he and his knights still held themselves like lords in whom the race of Númenor ran true. Men that saw them whispered saying: ‘Belike the old tales speak well; there is Elvish blood in the veins of that folk, for the people of Nimrodel dwelt in that land once long ago.’

Imrahil was the Prince of Dol Amroth, the second-highest office in Gondor during the War of the Ring. His forefathers, Faithful Men and Elf-friends, had sailed ere the Downfall of Númenor to Middle-earth and there their princely title was granted by Elendil, for his line and theirs were akin. The fief of Belfalas was their realm, and Dol Amroth their fortress by the sea. Imrahil himself was tall and fair, and in him the high blood of Númenor ran true. Yet it also was said by the Men of Gondor that there was Elvish blood in Imrahil’s line, and indeed this was perceived by Legolas when he met the Prince. In the mid-Third Age, the Elf-lord Amroth left the land of Lórien and came down the Anduin to the strand of Belfalas, there to take ship to the Undying Lands. He moored his ship just offshore and awaited his wife, Nimrodel, who had become separated from him during their journey to the shore. But Nimrodel did not come, and when a storm threatened to blow Amroth’s ship out to sea, he dove into the waves to return to shore and seek for her. Alas, neither Amroth nor Nimrodel were seen again by Man or by Elf. Yet it is told that one of Nimrodel’s maidens, Mithrellas, survived the journey from Lórien but became lost in the woods of Belfalas. She was discovered by Imrazôr, one of the Faithful Men of Númenor who had come to Middle-earth, and he took her into his household. They fell in love and were wed, and their son, Galador, was the first Prince of Dol Amroth and ancestor to fair Imrahil. Here, Imrahil is seen in the fair gardens of Dol Amroth by the sea during more peaceful days, before the War of the Ring. Thus, he has not yet had need to array himself in his silvery mail and instead is clad in a finely embroidered robe whose colours recall both the waters of the Bay of Belfalas in turquoise and deep blue, and the woods of Lórien in spring green and gold with. His fur-trimmed mantle, mallorn-leaf belt-clasp and golden leaf brooch all befit his lordly stature as the scion of both Númenor and Lórien. 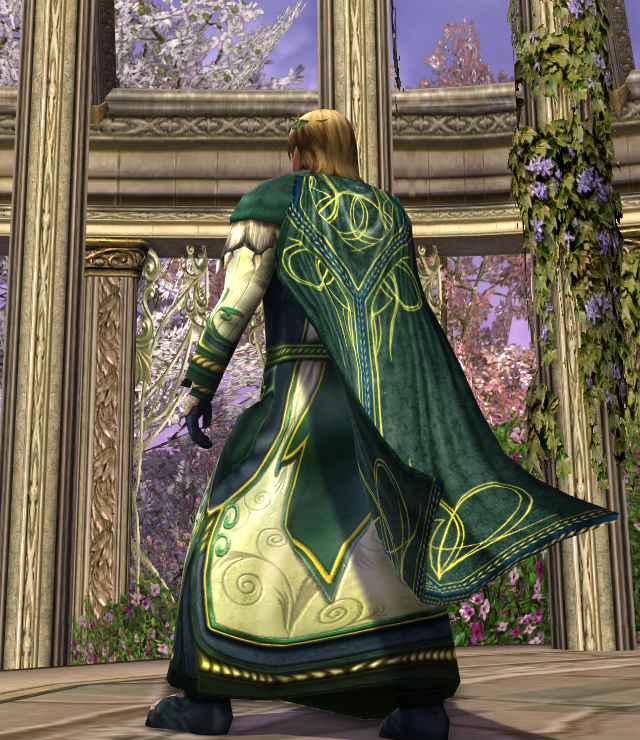 Many of you will by now have won various pieces of equipment via daily Hobbit-presents. These Mathom-hunter’s pieces come in light, medium, and heavy armour variations, and they reuse the appearance of several discontinued PvMP sets which feature a unusual gunmetal blue colour in their undyeable sections. Of course these pieces blend well with each other, but it’s a bit tricky to combine them successfully with other pieces because of the rarity of the gunmetal blue colour. I was pondering this last week when lo and behold I noticed that the trim of the Lissuin Robe from this year’s spring festival is a very good match! Thus this outfit was born to serve as one example of what to do with your newly-acquired Hobbit-presents. Also, because the robe feels to me like it has an Elvish character, its combination with the shoulders and boots, distinctly non-Elvish pieces, seemed like a great way to convey the partially Elvish ancestry of Imrahil of Dol Amroth. Tips: The Ceremonial Hat of the Written Word shares its appearance with those from the other level 60 Rune-keeper’s Moria instance cluster set and the Lore-master’s and Minstrel’s Moria instance cluster sets. If you happen to have old PvP pieces in your vault or wardrobe, specifically the Minstrel shoulders and boots from the Wandering Bard set, they do share the same appearance as the Mathom-hunter’s pieces used in this outfit. If you’d like to try a different cloak, the Worn Cloak of the Ranger (quest reward — epic [75] Volume 3, Book 5, Chapter 1: Separate Ways – Radanir), dyed navy, is another piece that is a great match for the unusual colour of the Mathom-hunter’s pieces, and of course the Lissuin Cloak is a perfect match. If you have the level 85 Barad Guldur light gloves, they are an excellent alternative to the ones used in this outfit when dyed turquoise. If you choose this option, dyeing the Mathom-hunter’s shoes turquoise will make them match perfectly.