Fellowship of the Ring: Meriadoc, Esquire of Rohan 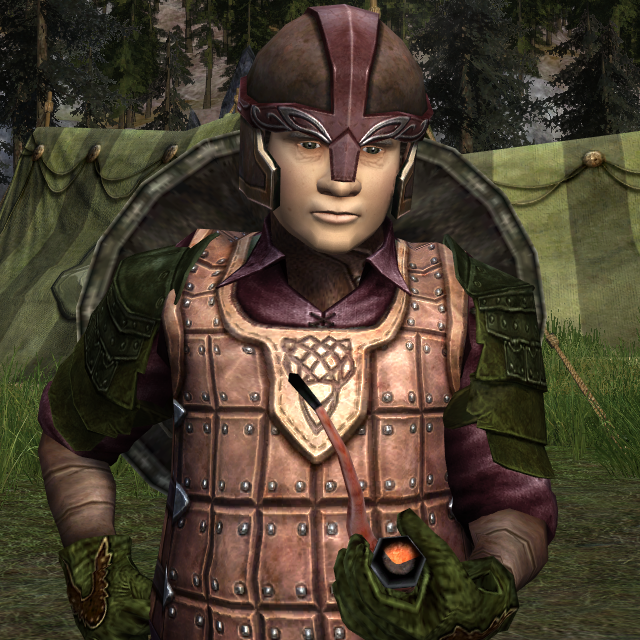 The tale of  the company was reduced to eight when Gandalf fell in Moria. Then the company’s Fellowship was broken upon the shores of Nen Hithoel when Boromir attempted to take the Ring from Frodo by force. At the same time, the company was attacked by Uruk-hai. Boromir was slain, Merry and Pippin were captured, and Frodo and Sam escaped by boat to the far shore of the lake. Aragorn, Legolas, and Gimli resolved to let the Ringbearer go and instead to pursue the Uruks. Thus the company was scattered.

Merry wielded his Barrow-blade fiercely against the Uruks before they managed to capture him, and he “cut off several of their arms and hands”. Nevertheless, he and Pippin were captured and borne many miles over the fields of Rohan. They managed to escape when the Uruks were attacked by a troop of Horselords, and to flee into the depths of Fangorn Forest. There they met Treebeard the Ent and were reunited with Gandalf. Later, in Rohan, Merry laid his sword across the lap of Théoden King, pledging his fealty. “You shall be like a father to me,” said Merry, but Théoden replied, “For a while.” Merry was given a shaggy grey pony, Stybba, and at the request of Aragorn was armed for war with a small helm, a jerkin of leather, and a round shield bearing the device of a white horse. Although Merry wished to join the muster of the Rohirrim and ride to the aid of Gondor, he was forbidden by Théoden, who said that great though Merry’s heart may be, he could not ride a horse, and Stybba could not keep up with the great steeds of the Horselords. Nevertheless, Merry was carried to the battle in secret by the warrior Dernhelm, and took part in the Battle of the Pelennor Fields before the gate of Minas Tirith. Here he did his greatest deed of valour when the warrior Dernhelm faced the Captain of the Ringwraiths and was revealed to be the Lady Éowyn in disguise. To aid her, Merry stabbed his Barrow-blade into the wraith’s leg from behind, and the sword, wound with spells by the Men of Westernesse for the bane of Mordor, unraveled the ties binding the wraith’s spirit to Middle-earth. In that hour, Théoden King passed from the circles of the world, and Merry sat with him in his final moments, and he wept, for now never in happier times would they speak together of the herb-lore of the Shire, as they had planned.

For his heroism and great service to the kingdom of Rohan, Merry was named Holdwine, “Loyal Friend”, by Éomer King and given a war-horn from the hoard of the dragon Scatha. Upon returning home to the Shire, Merry winded the horn during the Battle of Bywater, rousing the local hobbitry against the ruffians that had occupied the country. That battle, of course, was won, and the Shire was scoured of villainy. Every year thereafter, the Horn of the Mark was blown on the second day of November, on the anniversary of the battle. Merry was called Meriadoc the Magnificent, and he became the Master of Buckland and wed Estella Bolger. He was made a Councillor of the North-kingdom, and wrote books on the herb-lore and nomenclature of the Shire. Many years later, after the death of King Elessar, their old friend Strider, he and Pippin travelled to Gondor and lived there for a time. At last Merry’s time in Middle-earth drew to an end, and his body was laid to rest for ever alongside that of King Elessar. 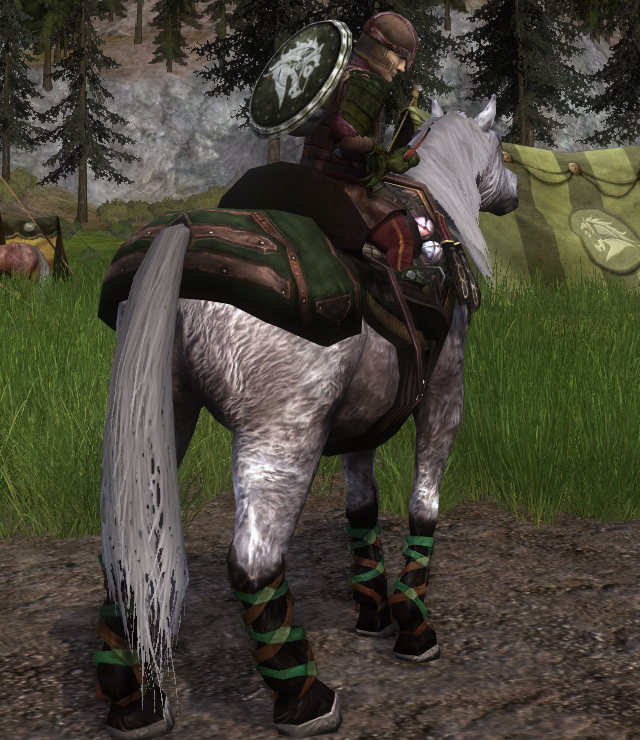 Quite some time ago, I completed my collection based on the Fellowship of the Ring with a composite portrait of the entire company and hinted that I had further plans for the collection. The present portrait of Merry in the later stages of the story is the extremely belated beginning of the those plans! Here also is the first portrait of Merry, a look at the character upon leaving the Shire for the first journey to Rivendell. Merry is a great heroic character, the most intelligent and resourceful of Frodo’s three hobbit-companions, and this is underlined by his deeds of valour after the scattering of the Company. Indeed, the description of his defense against the Uruks before being captured by them is very reminiscent of the last stand of Húrin, said to be the greatest warrior of Men in the First Age. Húrin stood alone during the Battle of Unnumbered Tears, surrounded by Morgoth’s trolls, and hewed off their arms with his axe, crying with each stroke, “Aurë entuluva! Day shall come again!”. Seventy times did his cry ring out, but like Merry, he too was captured in the end.

Tips: The helm used in this outfit shares an appearance with several other Dunland quest rewards. If you can’t find the shoulders used, you can craft a similar pair, Dwarf-make Outrider’s Shoulder Guards (crafted — tailor T3); they dye the same, but have a slightly different shape. The chest piece shares an appearance with other Helm’s Deep light armour quest rewards.

2 Responses to Fellowship of the Ring: Meriadoc, Esquire of Rohan