Legends of the Free Peoples: Durin the Deathless 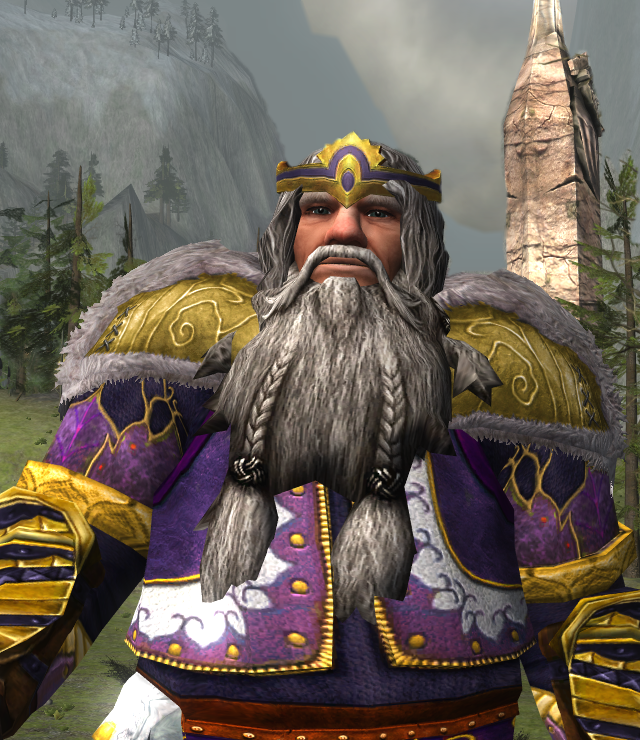 The Free Peoples of Men, Elves, Dwarves, and Hobbits keep many tales and songs and legends of the glorious deeds of their longfathers. In the Elder Days, the deeds of heroes were of a mythological stature and beyond the power of those in younger days to achieve. When the names of Eärendil the Mariner, great among both Elves and Men, and Durin the Deathless, Father of the Longbeard Dwarves, are invoked by the minstrels, the listener is filled with wonder, for their deeds are are mighty indeed. But the Hobbits belong to the younger days, not the Elder, and thus the deeds of their most legendary figures are less awe-inspiring in nature, yet no less important to the halflings; for Marcho and Blanco were the founders of their beloved Shire.

The world was young, the mountains green,
No stain yet on the Moon was seen,
No words were laid on stream or stone
When Durin woke and walked alone.
He named the nameless hills and dells;
He drank from yet untasted wells;
He stooped and looked in Mirrormere,
And saw a crown of stars appear,
As gems upon a silver thread,
Above the shadow of his head.

In the deeps of time, before the Sun and Moon had risen for the first time over Arda, and before the kindreds of Elves and Men had awakened, the smith-Vala Aulë grew impatient for the coming of the Children of Ilúvatar. He longed for creatures to love and instruct, and therefore he made seven beings of his own. He ensured they were stout and resilient to injury, for Aulë knew that they must be able to withstand the evils of Morgoth in Middle-earth. Aulë began to instruct his creatures in the language he had devised for their use when he was rebuked by Ilúvatar, who said that Aulë had not the power to create, only to make, for Ilúvatar alone is the master of the Flame Imperishable. Aulë saw that unless his will was bent on his creatures they would merely stand dumb and lifeless, and he humbled himself before Ilúvatar, saying that a child who plays at his father’s work does it not in mockery but from love. He prepared to destroy his seven creatures but Ilúvatar stopped him. Then Aulë looked in wonder on the beings he had made, for he saw that they shrank back in fear from his unfallen blow. Ilúvatar had accepted Aulë’s repentance and adopted these seven creatures, Khazâd in their new language, as children of his own; and he had granted them true life and being with the spark of the Flame Imperishable. But Ilúvatar would not suffer his adopted children to come before his own. Therefore, he commanded Aulë to lay the Khazâd to sleep in deep places beneath the surface of Middle-earth. Each was to be laid with a mate save one, the eldest, Durin.

When the time of the Khazâd, or Dwarves as they came to be known in the Common Speech, came at last, Durin awoke deep beneath Mount Gundabad at the north end of the Misty Mountains. He left the caverns beneath the mountain and wandered south, seeing many hills and dells that no-one had yet laid eyes upon, and he gave them names. At last he came to a deep valley beneath three mighty peaks, in which was laid a pool with a dark and glass-like surface. Durin peered into the cold, still waters and saw that they reflected the stars in the sky above him, seeming to form a glittering crown above the reflection of his head. He took this as a sign, and went up into the mountains above the pool, finding there great caves. He explored them and in time with the help of other dwarves who came to serve him, the caves were worked and expanded and wrought into the great mansion of the Dwarrowdelf, Khazad-dûm.

Durin was accepted as the king of those dwarves that had come to serve him, and thus he became the Father of the Longbeards. He reigned as their king for untold years. His lifespan was so great that he was called Durin the Deathless, and he lived to see the rising of the Sun and into the First Age. Under his rulership Khazad-dûm became rich and mighty, lit with crystal lamps set with the light of the Sun, Moon, and stars. Great works of skill, cunning, and beauty were wrought there, for the Dwarves, like their maker, excelled at crafts of the hand. Gems and arms were laid in horde, the throne-room of Durin was roofed in gold and floored in silver, and runes of power were carved upon its door. But long-lived as he was, Durin was not immortal, for that is the lot only of the Firstborn of Ilúvatar. In the fullness of age he died, having lived for ten lives of his kind, but the Dwarves say that when he died, the stars of his crown reappeared in the glassy surface of the Mirrormere, visible there until Durin should wake again in another mortal body and once again take up his throne.

Indeed, there were another six Durins, believed by the Dwarves to be reincarnations of the original Durin, and they all bore a great resemblance to him. At the time that Gimli son of Glóin looked upon the Mirrormere the seventh and final Durin had not yet been born. He would come in the Fourth Age, and would lead the Longbeards back to Khazad-dûm, reclaiming it at last. The Longbeards would live in the restored Dwarrowdelf until the world grew old and the mountains grey, and the race of the Dwarves failed at last, and the days of Durin’s folk were ended.

This is the second in the three-part “Legends of the Free Peoples” collection. Again, I’m working with the same purple, rose, gold, and white colour scheme that I used with Eärendil last week. It’s a pretty bold colour scheme that requires a suitably epic context. I really like the story of the making of the Dwarves by Aulë. It reminds me a bit of the biblical story of Abraham, another father who offered to sacrifice his son but was stayed at the last minute and went on to enjoy great prosperity. I also like that the reason for the strangeness of Dwarves in the eyes of Elves and Men — their stunted appearance, their lack of sexual dimorphism, and so on — can be attributed to the fact that Aulë, not knowing the mind of Ilúvatar, had only an imperfect idea of what the as-yet unawakened kindred of Elves and Men would be like. Durin is a name taken from Dvergatal, “the Tally of Dwarves”, in Völuspá, the first poem of the Old Norse Poetic Edda. The name Durinn derives from Old Norse dúrr “slumber, a nap”, so the name means something like “Sleepy” — a fitting name for the Father of the Longbeards, whose life began with sleep beneath the mountains and whose spirit is said to slumber until being reawakened in distant descendants. 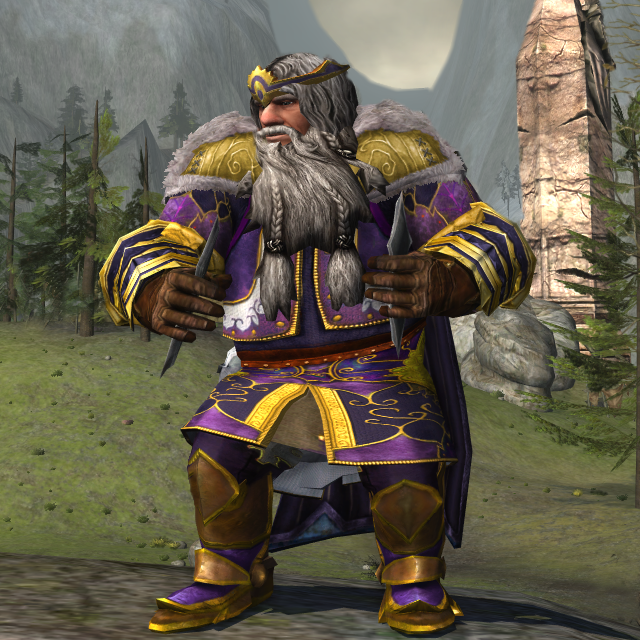 Tips: At the time of writing, the circlet in this outfit is available to purchase for mithril coins at Lalia’s Market. Depending on the character you used to earn the shoulders from the Beorning introduction, you may have to use the alternative shoulders (the two shoulders swap appearances on male and female characters). The other shoulders are called Grimbeorn’s Shoulders (quest reward — Beorning intro [1] Preparations for Travel). If you don’t have access to the cloak used in the outfit, a nice alternative is Brosh’s Cloak (looted — Great Goblin/Seat of the Great Goblin). Experiment with rose, violet, indigo, and purple dye to get the perfect colour.

4 Responses to Legends of the Free Peoples: Durin the Deathless