Legends of the Free Peoples: Marcho and Blanco 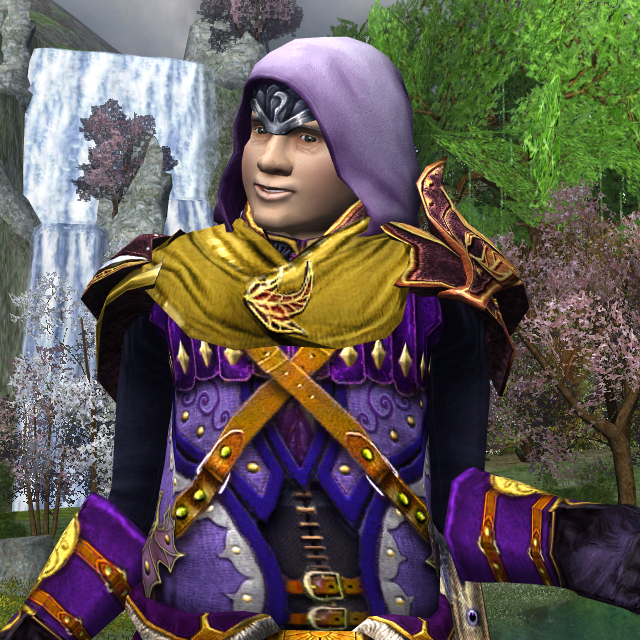 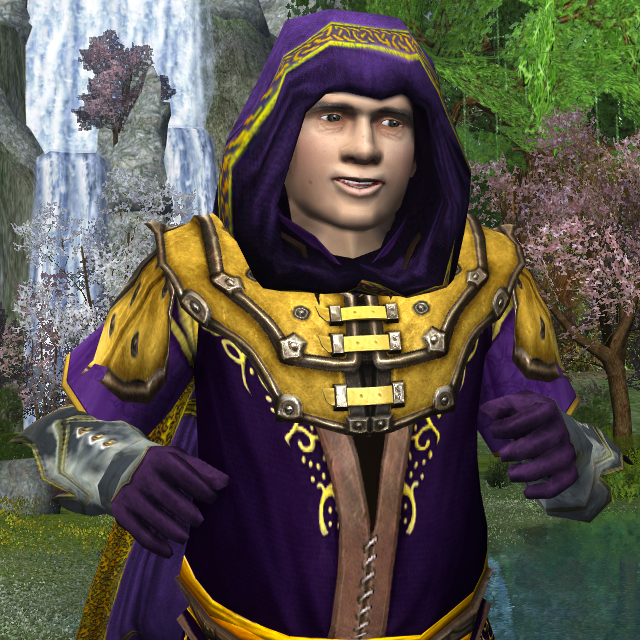 The Free Peoples of Men, Elves, Dwarves, and Hobbits keep many tales and songs and legends of the glorious deeds of their longfathers. In the Elder Days, the deeds of heroes were of a mythological stature and beyond the power of those in younger days to achieve. When the names of Eärendil the Mariner, great among both Elves and Men, and Durin the Deathless, Father of the Longbeard Dwarves, are invoked by the minstrels, the listener is filled with wonder, for their deeds are are mighty indeed. But the Hobbits belong to the younger days, not the Elder, and thus the deeds of their most legendary figures are less awe-inspiring in nature, yet no less important to the halflings; for Marcho and Blanco were the founders of their beloved Shire.

The Hobbits first come into the histories of Middle-earth when they dwelt in the upper vales of Anduin. Where they had come from is not told, but in time, they became divided into three kindreds: the timid Harfoots, the riverside Stoors, and the bold Fallohides. Unlike the other two kindreds, the Fallohides maintained a hunting tradition, and thus were naturally more adventurous and inquisitive. They were also more friendly with outsiders, especially Elves, and from them learned to love the trees and forests and gained skill in song and story. When evil began to stir in Mirkwood, the Hobbits grew afraid, and began to leave their homes in the vales of Anduin and move west across the Misty Mountains. The Fallohides crossed the mountains at the sources of Hoarwell, north of Rivendell, and from there began to move west across Eriador. In time, they settled in the country around the Bree-hill, for they found that some of the Harfoots had already made homes there. Because of their daring natures, the Fallohides were easily accepted as leaders and chiefs by the Harfoots. After dwelling in the Bree-land for three hundred years, two bold Fallohide brothers, Marcho and Blanco, wished to lead a group of hobbits further west in search of new lands to settle. Knowing that the lands west of Baranduin were the royal hunting grounds of the King of Arthedain, they journeyed to the city of Fornost Erain and were there granted formal permission by King Argeleb II to settle them. The requirements of the King were that the Hobbits uphold the laws of Arthedain, keep the bridges in good repair, foster the land, speed the King’s messengers, and finally, that they allow the King to hunt the forests and moors thrice each year. With this agreement in place, Marcho and Blanco led their followers across the Bridge of Stonebows and came for the first time into the fertile lands that would become their Shire. In time, they would be joined in their mild and bountiful land by the Stoors, coming up from Dunland, and the three kindreds of Hobbits became mingled. 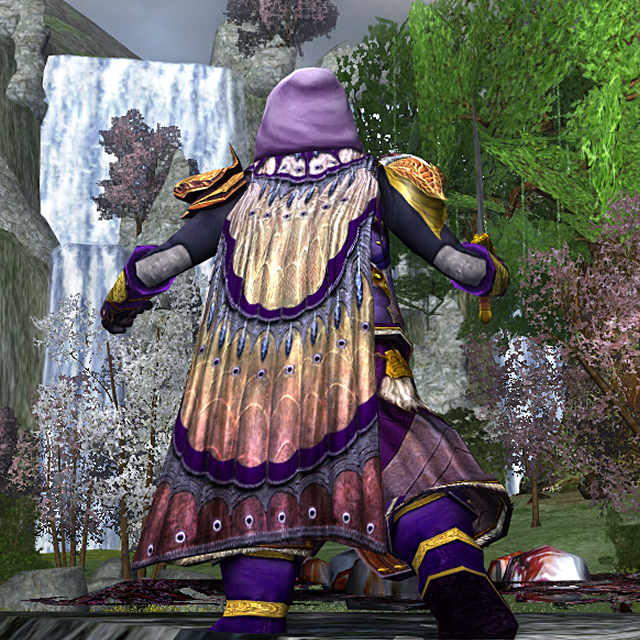 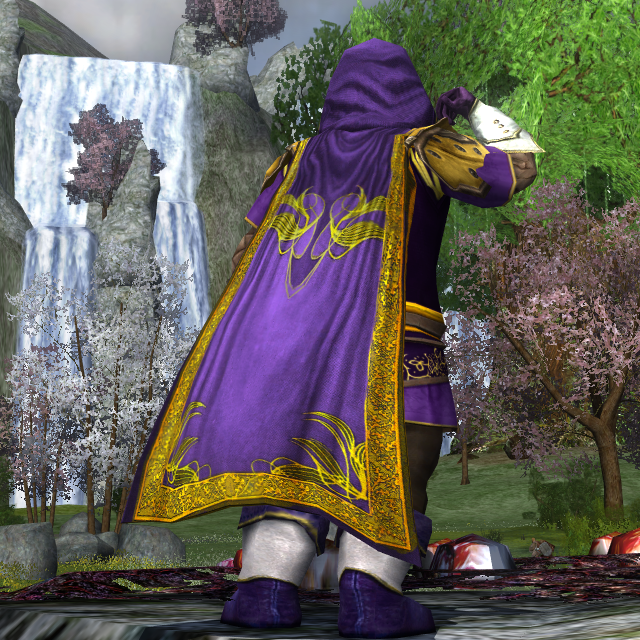 The names of Marcho and Blanco both mean “horse” (Old English mearh “horse” and blanca “white horse”) and they are of course analogous to Hengest and Horsa, the semi-legendary founders of Anglo-Saxon England whose names also both mean “horse” (Old English hengest “horse, gelding, stallion” and hors “horse”). Like the followers of Hengest and Horsa, the Angles, the hobbit-followers of Marcho and Blanco had once dwelt in a region called the Angle — the triangular area of land between Mitheithel, the River Hoarwell, and Bruinen, the River Loudwater. Thus, the Hobbits can be seen truly to be English (that is, Angle-ish, the people of the Angle) and the Shire to be England (the land of the people of the Angle). This is the third and final installment of the “Legends of the Free Peoples” collection. Since I couldn’t very well do just one outfit for Marcho and Blanco, we have a fourth bonus outfit for the collection! Once again, I’m working with the purple, rose, gold, and white colour scheme created by using pieces from the level 65 Annúminas sets and blending them strategically with other pieces. I don’t usually put boots on my hobbits, but I felt it was necessary to really sell this complex colour scheme. In making these outfits, I noticed that the spring festival tunic used on Blanco has been changed; originally the central part of the tunic was an undyeable dark green, but now the whole thing dyes — so if you had been avoiding using it for that reason you can dye away to your heart’s content. I had a really good time putting together all four outfits for this collection, and I hope you’ve enjoyed them as much as I have! 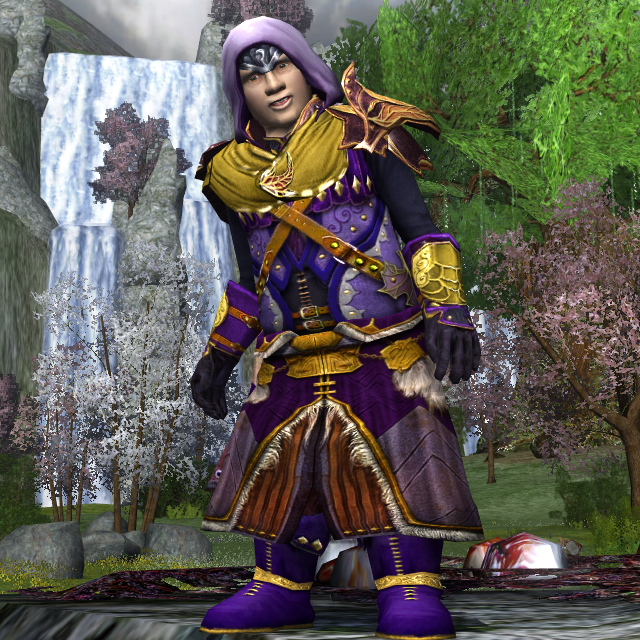 Tips: If you want to bring some gold into the headpiece of Marcho’s outfit, you could try the Shadow-stalker Helm (bartered Last Homely House Burglar trader or ceremonial version bartered — skirmish camp cosmetics vendor/Helegrod Cosmetic Clothing – Medium), dyed purple or rose. Marcho’s leggings have the same appearance as the Trousers of the Mighty Verse (bartered — Twenty-first Hall Minstrel trader).

5 Responses to Legends of the Free Peoples: Marcho and Blanco