Khazad-dûm, the Dwarrowdelf, was truly a wonder in its day. Mine, workplace, and residence of the Longbeards, it was vast and intricate beyond the imagining of outsiders. While passing through Moria on their dark journey, surrounded by impenetrable darkness and the fathomless weight of the stone and earth of the mountains, Gandalf told the company that there were many wells and streams within Moria, and indeed they could hear water churning down a deep pit, “as if some great mill-wheel were turning in the depths” — the Water-works. In the upper levels, there were “great windows on the mountain-side, and shafts leading out to the light”, where the three peaks of Moria were enveloped in clouds and swirling winds. The lower levels were hot with flames and smoke, perhaps home to the forges of Khazad-dûm, and below them, at unimaginable depths, the Foundations of Stone. Dwarrowdelf, wondrous mansion of the dwarves, was alive with the elements of Arda. When the Company of the Ring passed through Moria, Gandalf heard the orcs utter the word ghâsh, “fire”, and speculated that the lower levels were ablaze. Indeed, as they descended toward the First Deep, the heat grew steadily greater and they could see flames and smoke through a fissure in the floor of the Second Hall. Turbine has interpreted the fiery state of the lower levels as being due to a flammable, black, viscous-looking substance, perhaps rock-oil, filling the bottom of the Flaming Deeps. Fire rages unchecked now that flame-loving orcs and Durin’s Bane have free run of Moria. But perhaps it was not always so. In the days before Moria’s fall, this dwarf is a flame-tender. His task is to ensure that no uncontrollable fire should begin in these deeps, for Moria’s precious forges lie nearby, and indeed they rely upon the heat and flames generated by the rock-oil. At the same time, strategic burning off of this mysterious and potent substance must sometimes be carried out, and our flame-tender guides and banks the flames from this procedure (which also creates the useful by-product of salt). To protect him in these endeavours, he wears a heavy hauberk, boots, and thickly padded gloves, all specially treated by the secret craft of the Dwarves to be flame-resistant. His face is shielded by an iron mask that incorporates the same techniques to ward against sparks and heat as used by the Dwarves of the First Age who battled fiery dragon-kind. Nevertheless he has often had to hastily pat out his singed beard! In addition to his hauberk, he wears a corslet of brazen mail and heavy plated pauldrons, for unnamed creatures from the deeps sometimes creep into these fiery regions, and part of his duty is to drive these creatures away. For these reasons, this unquenchable dwarf is among the fiercest of the keepers of Moria. 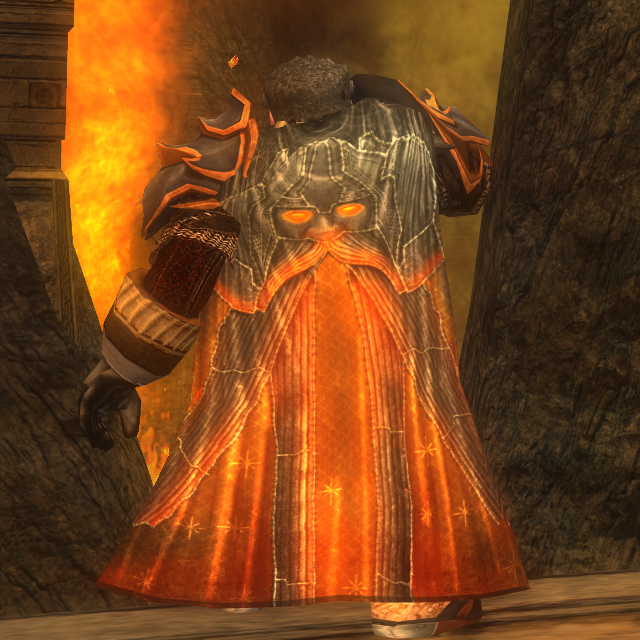 This is the final outfit in a four-part collection called the Keepers of Moria, based on special positions I imagine could have existed among the dwarves responsible for the maintenance of Khazad-dûm before its fall. Each outfit also refers to one of the four classic elements; this one represents the element of fire. This outfit seemed like a great opportunity to make good use of the nifty steel visor introduced as a cosmetic reward during the recent anniverary event. I like Turbine’s interpretation that the Flaming Deeps might have been filled with ignited petroleum or perhaps asphalt (what is often erronesouly called “tar”), and they proved to be a fun and dynamic location to take screenshots, with all the roiling fumes and jets of flame. 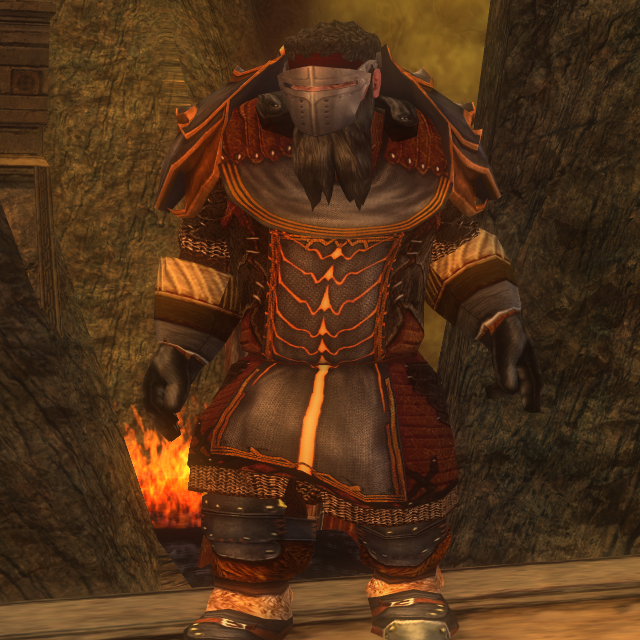 Tips: The Cloak of Shadow and Flame is a random drop from the final boss in the “New Devilry” instance of the Volume 2 Book 6 epic quest line. A ceremonial version can also be purchased from the LOTRO Store. If you prefer a more matched look, you could go with the Flames of the Deep cloak (bartered — skirmish camp cosmetics quartermaster/cosmetic items). Finally, this outfit would match very nicely with the Steed of Night, which from time to time is available for purchase from the LOTRO Store.

18 Responses to Keepers of Moria: Flame-tender